Leprosy, also known as Hansen’s disease, has been abhorred by the human race since the time of the Old Testament. However, the real facts of the disease and the severe denial of basic human rights through prejudice and discrimination have remained hidden in the shadows, with little opportunity for us to see the truth. For more than 40 years, WHO Goodwill Ambassador for Leprosy Elimination, Yohei Sasakawa, has carried on the battle against the disease. Now 78 years old, Sasakawa continues to visit remote locations around the globe in an effort to eradicate leprosy and restore human dignity. From a Pigmy village of 23 people to Vatican City in Rome, this documentary production has followed Sasakawa to 50 locations in 20 countries, amassing over 1,600 hours of footage. Can we finally overcome the stigma of leprosy?

Born in 1971 in Osaka Japan. Asano majored in Social Education in Waseda University, and as a member of the university’s Cinema Club, was introduced to inspiring documentary film directors such as Shinsuke Ogawa and Noriaki Tsuchimoto. After graduating from the university, Asano joined TV MAN UNION, INC., where he became an assistant director to Hirokazu Kore-eda, making his directorial debut in 2000 with an NHK special program about a Japanese deaf photographer Mr. Koji Inoue, titled “Photography Talked to Me.” He also directed numerous documentaries and commercials with a variety of musical and artistic themes. Asano became aware of leprosy when he conducted a two-year research project and directed a program on people affected by the disease in Japan during 2001 and 2002. He believes that “the job of a documentary film director is to take a hard look at the human condition”. Alongside his commercial production activities, Asano maintains a steadfast interest in deeply researched documentary projects including this film, which took him five years to complete between 2013 and 2017. “The Last Mile” is his first feature film.
His favorite directors are Theo Angelopoulos and Edward Yang.

Born in 1969 in Chicago, USA. Currently lives in Japan.
Musical composer in a range of genres including electronic, progressive jazz, rock, pop, noise, etc. Performed not only as a solo artist, but also in bands such as Gastr del Sol, Loose Fur and Kafka’s Ibiki as well as the iconic indie rock band Sonic Youth. Won a Grammy Award in 2005 for Wilco’s “A Ghost is Born” (producer). O’Rourke is an avid cinephile, and has produced music for many films including “School of Rock” as well as films directed by Koji Wakamatsu and Kazuyoshi Kumakiri.

There’s one face I will never forget.

It was still in the early days of production, I visited a man living in a hut at the furthest edge of a small Indonesian seaside village. He lived alone, ostracized by friends and family because he had contracted leprosy, also known as Hansen’s disease. The thin walls of his hut were full of holes, enabling malaria-laden mosquitoes to swarm inside. His possessions were limited to a simple sleeping mat. The man shut himself in, spoke to no one, and spent his days sitting with his knees held to his chest. He subsisted on two meager meals a day, delivered by his stepsister. On the days she didn’t come, he went to sleep hungry. It was literally a life of “solitary confinement.”

Why am I alive?
What purpose does my life serve?

How many countless times had he asked himself these questions? Words like “resignation” and “despair” were woefully inadequate to describe the wretched expression on his face. With deep, mournful eyes and an occasional gentle smile, Abia Rumbiak, who had actually been cured of leprosy years before, began to tell us his life story.

Over a four-year period of the production, we witnessed many like Abia Rumbiak, who have lived in the shadows, in silence and solitude, abandoned by society and even family only because they contracted leprosy. Each one of them wore the same haunted expression, unique to those who shared their experience. If I may say so, they were “good faces”. Forced to live out their existence under such unforgiving circumstances, they searched for answers to fundamental questions like “What does it mean to live as a human being?”

My wish is for as many people as possible to see these faces, which illuminate human strength, depth and beauty. 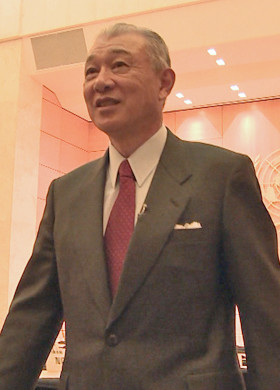 Born in 1939 in Tokyo, Japan. Chairman of the Nippon Foundation.
On a 1965 site visit to a Korean leprosarium with his father, Ryoichi Sasakawa, Yohei first witnessed the despair of leprosy patients, and resolved to act to fight this cruel disease for the rest of his life. Yohei continues to visit leprosaria, hospitals and colonies in about 100 countries around the world, meeting with heads of state and the media in a crusade against the disease and to disseminate more accurate information. Between 1995 and 1999, the Nippon Foundation undertook a mission to distribute approximately USD 50 million of MDT (multi-drug therapy medicine to treat leprosy) free of charge worldwide, resulting in a dramatic reduction in the number of afflicted patients. In March, 2004, Yohei became the first to address the topic of "Leprosy and Human Rights" at the 60th UN Commission on Human Rights. In September, 2010, all 192 member countries of the UN Human Rights Council unanimously adopted a resolution to eliminate discrimination against people affected by leprosy. Since 2001, Yohei serves as the WHO Goodwill Ambassador for Leprosy Elimination.

Born in 1968 in Kartanaka, southwest India. Contracted the disease in 1977 at the age of 9, and then abandoned by his father at a leprosarium in Telangana, 325 km away. Transferred to a facility in Hyderabad at the age of 11, where he was confined until the age of 25. Currently, the chairman of APAL (Association of People Affected by Leprosy) India, representing and working on behalf of 850 “leprosy colonies” in India.

Born in 1967, and currently living on Biak Island in eastern Indonesia. Abia contracted the disease in 1978 at the age of 10, but because little was known about the disease in his village, he was left untreated until the age of 18, resulting in nerve damage and loss of feeling in his right leg. He was cured in 1985 following treatment with MDT. At age 30, his numb right leg was infected when he didn’t realize it was pierced by a fishing hook. At age 40, pronounced disfigurement caused him to be shunned by his family and neighbors. (Everyone in his village, including Rumbiak himself, mistakenly believed that his disfigurement was due to leprosy.) He currently lives in isolation in a hut outside the village.

Date of birth: unknown. Born in Odisha in eastern India. Madhu contracted the disease in 1990, and was confined in an isolated hut outside his village by the village elder. At the time of filming, he still lived in the hut. Received MDT treatment in 2000 after his plight came to the attention of the APAL State Representative. Despite being cured of the disease, he was still restricted from the village. His wife brought him food 2 – 3 times a week. He was forbidden to have any physical contact with his wife, children or grandchildren.
Madhu died in 2016.

Their eyes are intimidating. Having experienced discrimination, they can discern the truth in an instant.
We should not underestimate their understanding of society just because they’ve lived in confinement.
They see the ‘world’ through their little window.

The patients and people affected by leprosy are the protagonists in this battle. Healthy people like us have always tried to guide and support them, “feeling pity or feeling compelled to do something for them” as if they were subordinated to us. That’s wrong. I believe we need to become supporting actors, encouraging them to speak out and participate in society.

Imagine an important person visiting, and only talking to two or three people and then leaving. How would that make the others feel?
That’s not good.

There’s nothing to worry about. You will be cured.

If you don’t try to see things from their viewpoint, you won’t see anything.

In my visits around the world, I’ve learned that administrative officials are eager to present the good side of things, but are ashamed to show the ugly side. It’s up to you to ‘discern’ the true conditions in such a situation.

There are people affected by leprosy living in places where it’s a two-hour walk to get water, and a three-hour walk to gather firewood. To find out whether the medications have reached them and the conditions of their lives, you have to travel to where they live. Just reading reports in an air-conditioned office will solve nothing.

There is an ‘invisible wall’ built on discrimination and stigma.

Having a dream to aspire to is paramount in life.